Posted on August 18, 2016 by bestmedicalinfo

Three days ago we emailed this letter to Ms Catherine King. 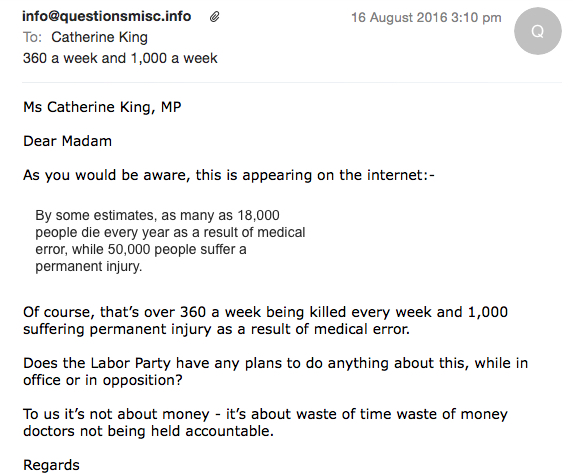 Ms King is the Shadow Minister for Health and Medicare in the Federal Parliament.

We would have thought that claims that medical error is causing over 360 to die every week in Australia and 1,000 a week to end up with permanent injury would be of some concern to the Labor Party in general and Ms King in particular. We’ll let you know if we hear anything from her.

A 25 Aug 2025 update: 360 every week being killed and 1,000 every week being permanently injured by medical error are pretty big numbers, wouldn’t you agree? You’d think that the politicians would be able to respond pretty quickly with what’s being done about it.

This entry was posted in Politicians or those who would aspire to be politicians. Bookmark the permalink.