Posted on May 9, 2019 by bestmedicalinfo 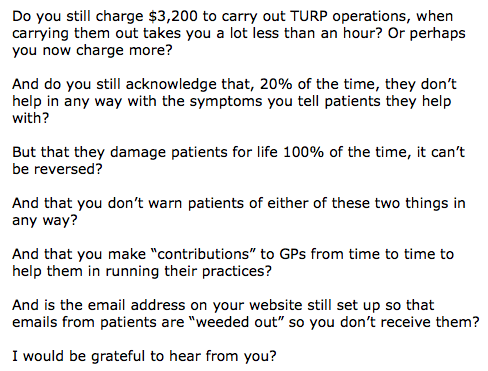 We’re not expecting a response as we’ve sent him at least 20 other emails asking for “his side of the story” which haven’t even been acknowledged, let alone responded to – but we’ll let you know if he responds to this one!!!!

A 15 May, 2019 update: A few weeks ago we had a phone call from one of Dr Brooks’ henchmen saying that what we were putting up on our blogs and websites was starting to affect his practice and that we owed Dr Brooks an apology!!!!!?????. Our readers will guess how we responded – that we would be more than happy to put up on them his side of the story if he could send it to us. As we’ve said, we’ve sent him at least 20 emails inviting him to tell his side of the story, but he doesn’t even acknowledge them, let alone provide any responses. And the email shown above is yet another one, that 5 days later, he hasn’t acknowledged, let alone provided a response to.

Of course, even though our emails have been sent to two email addresses we have for him, and they haven’t come back, we realise that, if it ever became relevant, Dr Brooks would deny receiving them.

What we’ve learnt the hard way, and say now, is that if we send an email to any one, and it’s not even acknowledged within 14 days, even if we haven’t got one of those emails back saying that it can’t be delivered, that, if ever it becomes relevant, the addressee will ALWAYS deny that he or she got it.

Email us at info@questionsmisc.info.