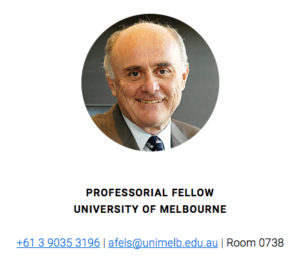 The person who should most be in gaol in Australia is Professor Alan Fels, together with a few other people like Nick Greiner who fell for his indescribable rubbish.

Because he turned so many professions and industries in Australia into ones where the crooks do better than the good guys.

By putting forward the indescribable rubbish that scales of fees, or whatever your might like to call them, should be illegal because they restrict competition.

A very simple explanation of this is this.

For instance, we believe that there should be a scale, or whatever you might like to call it, which says how much Urologists charge to carry out TURP operations – say it was $2,000. Then the public could easily know roughly how much it was going to cost them, and Urologists could indicate that their charges were 5% below the scale or 5% above the scale or whatever.

At present, under the influence of Fels rubbish, such scales are illegal, because they restrict completion??????

We are about to email 30 or more Urologists asking how much they would charge, and theoretically, from their responses, (although we’ll probably get none!) we could construct some sort of scale for the information of the public, but, as far as we know, (although we don’t claim any real expertise on the matter,) this would be illegal.

What we do know is how this worked with the legal profession in NSW in relation to conveyancing in particular, because one of our readers drew our attention to it some years ago.

Traditionally, for at least 30 years, there had been two things – (1) a scale of costs, of the type I’ve described, AND, (2) a professional requirement that solicitors charged what the scale said, they could be struck off if they didn’t. It’s hard to believe that Fels could have been so stupid, although nothing would surprise us about this evil man, but he put forward the idea that it was the first of these things that restricted completion, not the second. And Nick Greiner, who was the NSW premier at the time, obviously said, “Oh yes! That makes sense. We’ll make the scale of costs illegal.” And overnight, the conveyancing industry became one in which you had lie and cheat and scratch to get any business, and our reader went bankrupt because he wasn’t very good at lying and cheating and scratching.

We’ve sent so may emails about this to Allan Fels, but he’s so arrogant that he hasn’t even acknowledged one of them. Why should he? He’s a Professor, away from any competition as far as his income is concerned, and like so many like him, glorying in an AO from the Queen for goodness knows what.

We’ll let you know how we get on writing to 30 or more Urologists. And we’ll send a copy of this post to Fels – although we know he won’t even acknowledge it.

It’s a strange society in which we live – we have a bloke who glories in the grand title of “Professorial Fellow University of Melbourne,” who’s on a generous remuneration package, away from competition, who will retire on a generous pension for life, who already has an award from the Queen – when he should be in gaol for the damage he’s done to Australia and Australians.