Modern Democracies and the people 1

Posted on August 4, 2016 by bestmedicalinfo

This paragraph appears in an article in today’s Australian.

The fact is that there is a culture of cover-up every where you look in the health system in New South Wales, in nowhere more than in Jillian Skinner’s political set-up. The chances of getting honest, upfront and helpful responses to questions from it on even the simplest of matters is quite remote.

As modern communication technologies have become better and more efficient, the chances of getting honest, upfront and helpful responses to our concerns from the likes of Mike Baird and Jillian Skinner have become more remote, not less so.

Our guess is that they have statistics which indicate that if they provide ordinary email addresses they are going to get many more letters from the people than if they only provide email forms and ask for all sorts of irrelevant questions, (like the full names and addresses of correspondents,) and so they have brought in consultants to suggest every trick in the book along these lines – while at the same time spruiking such lies as:-

We have been dealing with Jillian Skinner for more than 8 years and during all that time she has always had and ordinary email address, but we have just found out that if we want to send letters to her in future we must use a means reflecting the Mike Baird philosophy.

In conjunction with one of our readers we have just negotiated these new fangled methods to send her this:- 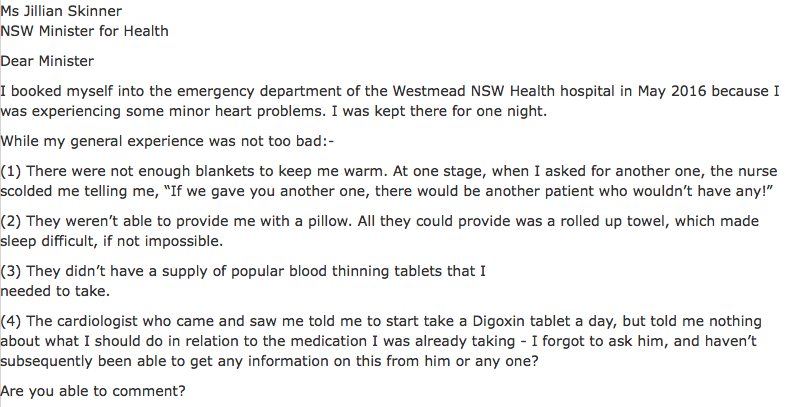 We’ll let you know how we get on.

Ironically, just after we’d written this, we became aware of this article, about the exploitative fees being charged for parking while at NSW Health hospitals – and it concluded with, “NSW Health declined to comment!”

This entry was posted in Modern democracies and the people. Bookmark the permalink.