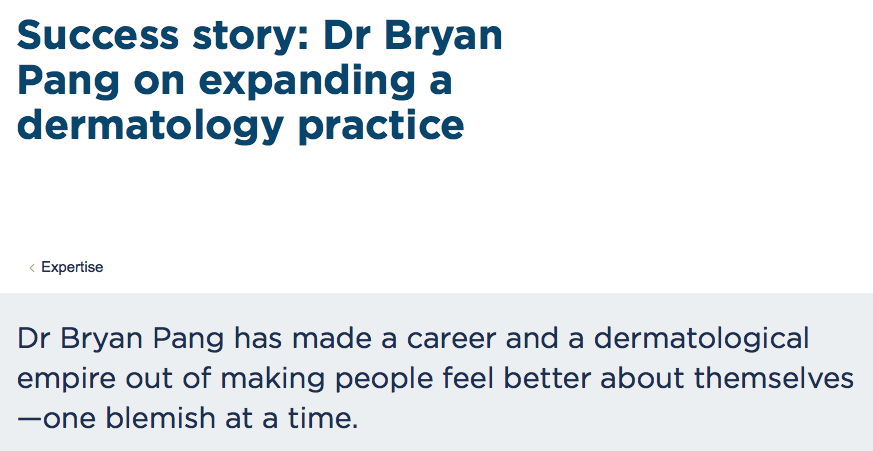 (Use this link to be taken to details of the five practices in his “empire.”)

Dr Pang skiting about his success as a dermatologist, while, at the same time, there are so many ratings on him on the web that are amongst the worst we’ve ever seen.

SO many people obviously thinking, “A doctor is a doctor – they’re all the same.” Readers, we all have to realise more that they’re NOT all the same! While many doctors deserve 10 out of 10, there are lots that deserve 2 or 1 or 0 out of 10, at the most! Our health and welfare is at stake.

To us how doctors respond, (and other people and organisations,) when emails are sent to them, provide more helpful indications as to what they’re really like, than the spiels they pay marketing people to come up with that make them out as some sort of gods. This simple email was sent to Dr Pang earlier today, (26 Apr. 2019,) using the email form on his website.

Perhaps we’ll have a better idea of what he’s really like when we get his response to this – that’s if we ever get one.

A 3 May 2019 update: A response has been received to the letter sent to Dr Pang on 26 Apr. 2019, using the email form on the Sydney Dermatology website, using the ordinary email address – info@sydneydermatology.net.au.

But any of our readers thinking of using him would need to be aware of the ratings on him on the web that are amongst the worst we’ve ever seen, particularly those on the RateMDs.com website, about which the most concerning thing would seem to be that they seem to be getting worse and worse, not better.

Mail us at info@questionsmisc.info.